In this topic, we discuss a potential solution to mitigate the Conflict spamming attack in a setting where milestones or checkpoints exist.
Here, an attacker has created several equivalent conflicts to introduce a network split and to force the re-attachment of many honest transactions.

The availability of Coordinator milestones is a powerful tool as it provides us with global and unmodifiable timestamps. This allows us to specify a well-defined and globally accepted way to compute the ledger state of a milestone even if it contains conflicting transactions in its past cone:

Now, the ledger state L_m for milestone m can be computed in the following way:

Essentially, B_i is the balance seen at bundle x_i . When computing the next B_i , we ignore x_i if it makes the balance negative (i.e. it is a double spend).

Note: As described in the algorithm, conflicts should be ignored not only within one MS, but also across multiple MS. Otherwise, the following situation could occure: 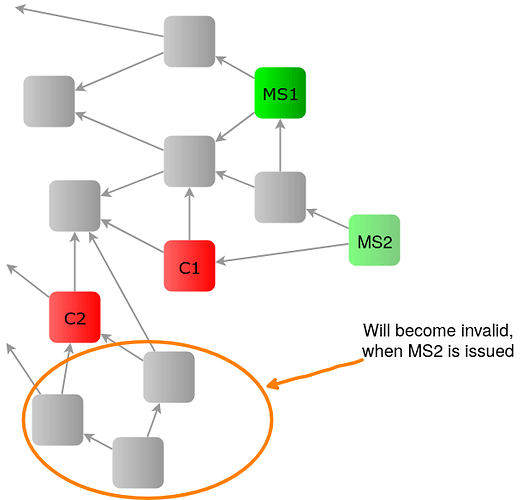 Coordinator%20Improvements-Conflicts%20Min%20Depth619×584 30.4 KB
When there is only milestone MS1, using Conflict White Flag, it is perfectly valid to issue to conflicting transactions C1 and C2 and to attach to those conflicts. When the next milestone MS2 is issued only confirming C1 but not C2, C2 must also be ignored. It cannot be seen as a conflict, otherwise all valid transactions attached to C2 will also become invalid and would require re-attachments. This would allow for a different kind of splitting attack.

The following are the advantages of this system:

This method has the following potential downsides:

They can, for example, be ordered by hash (or in some other way since it doesn’t matter).

The simplest way to do this is to use DFS where we always pick the trunk first (arbitrary choice). This will give us a topological order that will be consistent across nodes. We also have to traverse the txs anyhows so we are actually not incurring any additional overhead with sorting.

We should of course wait until we go down the recursion stack and when we hit a leaf (a transaction that has all of its “approvees” confirmed) only then we should start changing the state as we traverse up. This will ensure that older txs are the ones that count.

Currently the node API just tells you whether the tx is approved or not via a flag the tx has. Is there anyone who wants those fancy proofs?

So just to be clear, what we can do is while we traverse is to save on the side any “bad” bundle that leads to a negative state. After we are done applying all the “good” bundles to the state we can try to apply the “bad” ones again.
We repeat the process until the “bad” bundles set size stops changing.

This adds overhead, but I think we should allow temporary overdrafts. Especially if the order of the bundles is not defined by the tangle DAG.

Also, the way we do conflict detection is dependent on whether we do reusable addresses (with Hybrid signatures: Combining WOTS with hashed public keys). In the meanwhile I will create an issue on github that ignores the reusable address portion…

Two remarks to the original proposal:

The OP has been eddited to take these aspects into account.

As temporary overdrafts are currently not supported

They are supported currently. When a milestone comes in we first compute the new ledger state and only later we check that they are consistent.
To me temp overdrafts make sense, because one can make a funding transaction and then make another transaction that utilized the funds but it is in the “wrong order” on the tangle