In the current implementation of IOTA, nodes are allowed to issue new transactions after solving a cryptographic puzzle. This mechanism aims to deal with spam attacks. However, due to the intrinsic parallelizable nature of the function used for the puzzle, an attacker may rent specialized hardware (e.g., FPGAs) in order to speed up such a computation (in the order of several orders of magnitude), and successfully spam the network. In this article, we propose an alternative function, called verifiable delay function (VDF), which is not parallelizable. For a complete description of the motivation leading to this article, we remind the interested reader to the post "Adaptive Proof of Work’’.

State of the art

VDFs has been recently formalized by Boneh et al. [Boneh2018]. These functions can only be solved in a predefined sequential number of steps (i.e., the difficulty, set as input parameter) which cannot be parallelized. However, its verification time is small. Furthermore, theory guarantees that an adversary has, in practice, no chances to find a correct solution randomly.

In both Proof of Work (PoW) and VDF a node has to perform some computation to solve a given puzzle. We list here the key differences between the two approaches:

Various researchers have proposed different VDFs based on specific number-theoretic functions, e.g., modular exponentiation [Dwork1993, Pietrzak2018, Wesolowski2019], supersingular isogenies over elliptic curves [Defeo2019], pairings over elliptic curves, injective rational maps between extensions of finite fields [Boneh2018]. In the following, we propose a implementation of VDF for the Tangle based on the work of Wesolowski [Wesolowski2019].

A VDF for the Tangle

In this article, we propose an alternative implementation, based on VDFs, to set a maximum allowed throughput per node. Our goal is to limit the transaction rate to guarantee spam prevention such that the access to the network is only proportional to the mana (a discussion about mana is provided in a different post, called "Mana comparison’’.) owned, and not to the processing power.

The main building blocks of our proposed anti-spam mechanism are depicted in Figure 1. When a node wants to issue a new transaction, it must solve a VDF that takes two input parameters: (i) the transaction hash of the previous transaction h issued by the same node; (ii) a difficulty parameter d, that depends on the mana owned by the node, indicating the number of iterations to compute. The solver, then, will attach to the new transaction a proof of the computation of the VDF. Thanks to this proof, when the transaction is gossiped, all nodes can verify in short time whether the solution of the VDF is correct.

vdf_blocks2100×579 71.7 KB
Figure 1. Building blocks of our proposed VDF-based anti-spam mechanism. The function considered takes as an input the transaction hash of the previous transaction and a difficulty, and produces a valid proof.

VDF based on modular exponentiation

The function used as a VDF must satisfy the following three requirements:

In order to deal with the previous requirements, we choose a VDF based on modular exponentiation, which guarantees fast verification time. In particular, we take inspiration from [Wesolowski2019] to reduce the size of the proof. Furthermore, we want to mention that the fairness requirement listed above is satisfied by modular exponentiation in the sense that specialized hardware can gain, at most, one order of magnitude, while PoW can introduce discrepancies of more than seven orders of magnitude.

As anticipated, we choose a function based on modular exponentiation, where the solver must compute x such that x = h^{2^{2^t}}\mod N, where N is a modulus of size \lambda bit known by all nodes in the network. The parameter N = p\cdot q is the product of two large primes, as in the RSA public key scheme. A main challenge is to generate N in a distributed way such that none of the participants can guess the values of p or q. To this end, we are currently developing an algorithm based on the previous work of Boneh and Franklin [Boneh2001] and Fredriksen et al. [Frederiksen2018]. 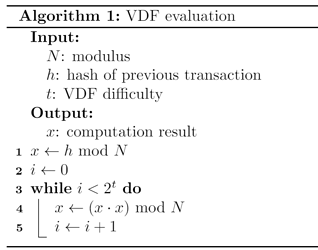 algo736×577 22.1 KB
After the computation of the VDF, the solver calculates a proof of its solution. We decide to forward such a proof instead of the solution itself in order to decrease the verification time. Furthermore, in order to prevent the factorization of the modulus N, which would break the protocol, we require \lambda to be at least 1024 bit. On the other hand, a 128-bit proof provides enough security at the cost of little overhead (i.e., the transaction size will increase by only 16 bytes). 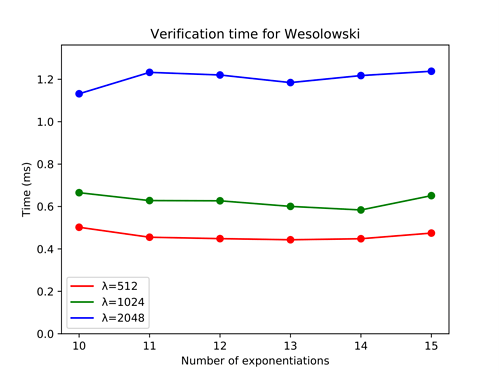 The research on VDF will follow three main directions: