Description of the attack

The IOTA Congestion Control Algorithm (ICCA) is built in such a way that messages issued by honest users experience similar delay, defined as the time needed for this message to be delivered to all nodes. For the sake of simplicity, in our simulations we classified nodes in three categories:

From simulations, we notice that best-effort nodes set an upper bound on the expected delay. This is because such nodes continuously “waste” their deficit, hence they have to wait some time before the next message can be scheduled. On the other hand, content nodes issue messages only when their deficit is large enough. Finally, messages issued by attackers are stuck in honest nodes’ queues and not scheduled in a short time. The interaction of scheduler and rate setter is described in previous articles. 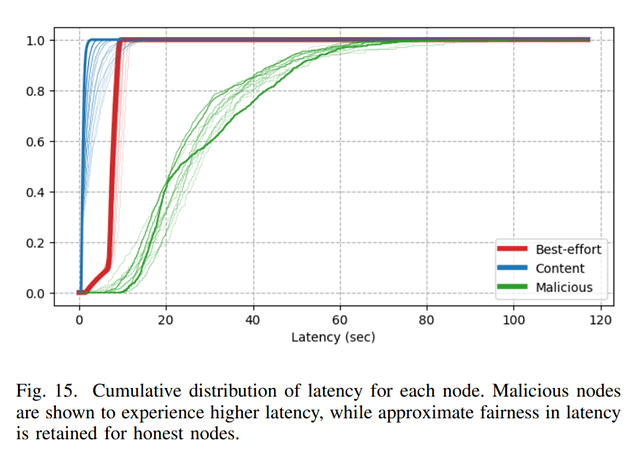 While attackers are blacklisted when they issue a large number of messages, it may happen that honest nodes are unlucky and attach their messages to some malicious node’s message. Since messages are gossiped only when their parents are, attaching to messages with large delays also increases the delay of the child message.

Our claim is also validated through simulations. 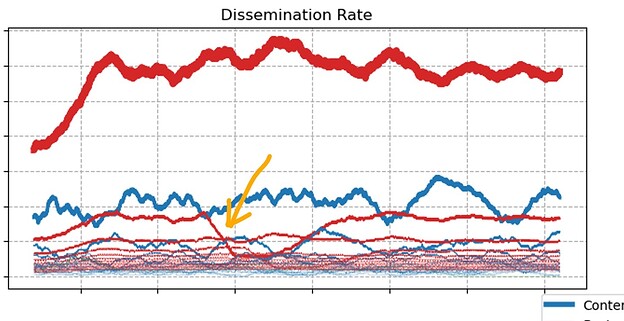 The scenario presented in the figure above shows an attacker with low mana issuing different streams of messages to different neighbors. We see that its neighbors (orange arrow) are slowing down because they are more likely to append their messages to the attacker’s ones.

The idea is to “promote” messages which have already been approved, that is, in other words, have already been started building their approval weight. In this proposal, the way the scheduler increases the deficit is different whether a message in the outbox is a tip or has already been validated. In the former case, we proceed as usual by increasing the deficit proportionally to the access Mana of the issuing node; in the latter case, we propose two options:

To evaluate the validity of this proposal, we need to consider the following three things:

However, since this approach is relevant only for attacks performed by low mana nodes, we can assume that the additional throughput gained is negligible.

What happens if an attacker with reasonable amount of mana first creates a lot of small mana nodes and then performs the attack via those?

Here is an idea:

Let me see if I understood correctly. You are basically proposing the first option (Boost based on approver’s priority) where the work to schedule any child message is equal to its work plus the work of any unscheduled message in its past cone.

Exactly! Maybe it was the same exact idea. Also I think I quoted the wrong bullet point.

I guess the attack is amplified.

In the proposal the work of the children messages remained the same. I think your proposal makes more sense (I guess it’s fairer) but it may be a bit complicated to implement as you have noticed.