The following document is a result of the work of the Virtual Milestone task force. It is a proposal for the commitments of the blocks, transactions, and state, supported by dividing the Tangle into epochs.

Regular checkpoints into the network are key for agreeing on a finalized state, so data can be compressed into a local snapshot and pruned. These checkpoints must also provide a mechanism to prove inclusion after the Tangle has been pruned. It was initially proposed to have “elected” Milestone creators that would be used by the rest of the network. This approach would require a consensus mechanism on its own to agree on who these creators are and it was therefore deemed impractical.
Instead, we propose that every node includes cryptographic commitments on acceptations as part of every block it issues. Those commitments then form chains, and nodes agree on the same ledger state by following the heavier one.

Epoch is a time range of fixed duration EpochDuration. Epoch can be calculated based on the Genesis timestamp (or other agreed point in the snapshot) and provided Epoch Index (EI).

Bucket is used for Tangle segmentation. Buckets are created based on Epochs. A bucket is a part of the Tangle that belongs to a certain epoch or several consecutive epochs.
Given block and corresponding objects belong to a bucket if block timestamp falls into underlying epochs that define this bucket.

Transaction membership to an epoch is retrieved based on the timestamp of its attachments (accepted block that includes this transaction).

Acceptation of a block

This additional rule about block orphanage is needed in case of a situation when a node sees a block that in his perception of a Tangle has collected enough AW, however it is not a part of a preferred commitment.

Acceptation of an epoch

Epoch is committable (becomes ready for commitment) when:

Confirmation of a block

Details on a block confirmation will be defined in a separate document regarding Confirmation Gadget.

Confirmation of an epoch

Epoch is confirmed when there exists a single block containing a commitment to this epoch that has been confirmed. 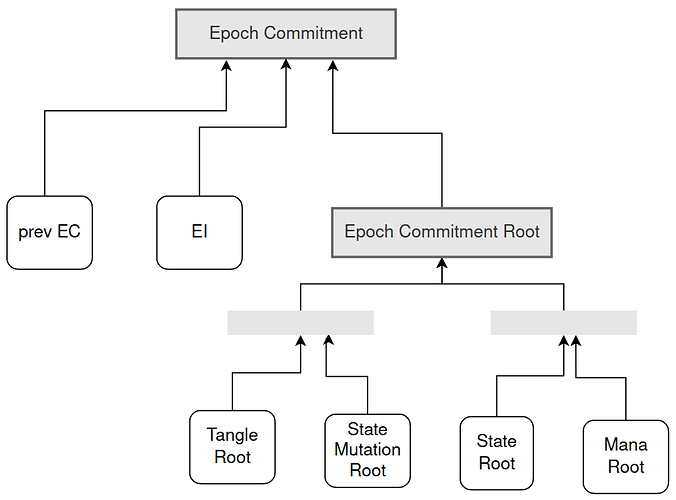 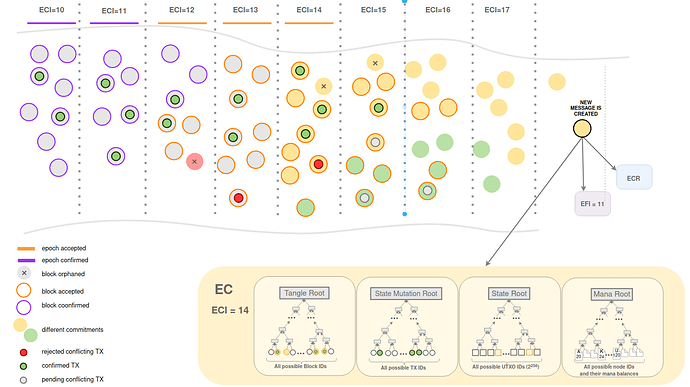 Upon a partition, as Tangles and acceptation grow apart from each other, different EC chains can start to form.
Nodes track ECC locally and follow the heavier ECC. 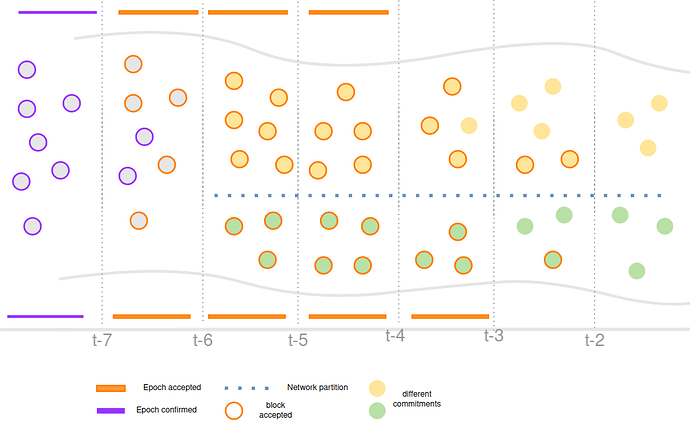 After the partition ends nodes will simply follow the heaviest chain.
We do not merge Tangles upon partition: we select who wins. The rest of the blocks would need to be reattached.

Visualization of the Tangle with many forked ECC. 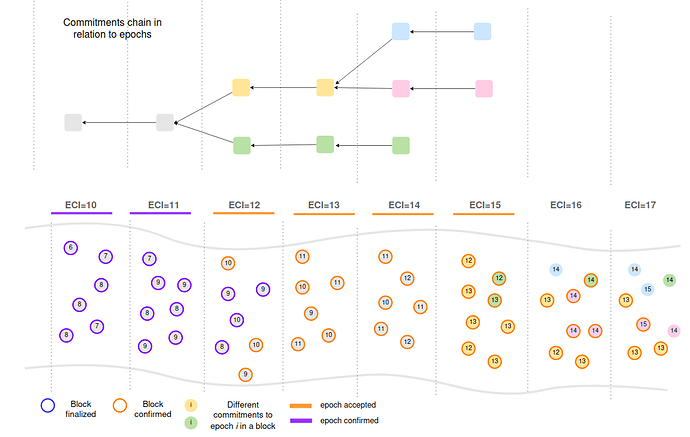 Block is modified as follows:

Because each block commitment is signed, nodes can create virtual blocks (commitment - issuer list) with all node identities that are committed to a given epoch.
The next step is to calculate the heaviest chain based on this list and local perception of mana.

Local perception of mana can be defined as:

The proof can be generated as follows: 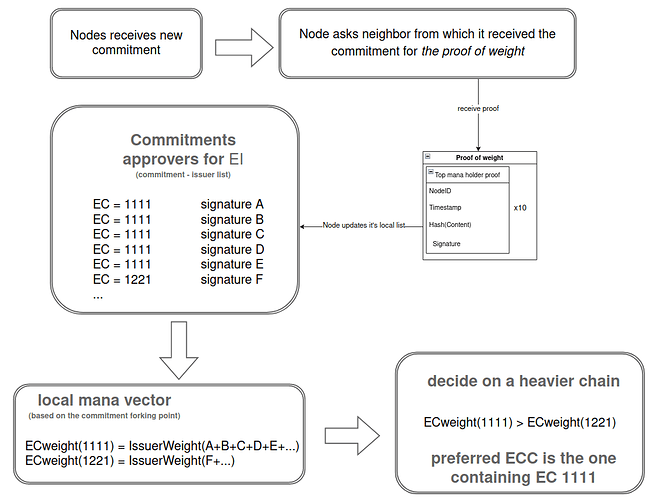 Switching to the heavier chain

Upon determining a better ECC to follow, our Ledger State, including Mana, needs to be reset to the forking point and the ECC solidified backward and replayed.

The accepted parent counter represents the number of accepted parents, if the tip is orphaned (it has reached the Fishing condition) we walk the past cone and decrease the counter.
The orphaned block becomes unaccepted.
Orphanage event is triggered when:

Idea: instead of doing the Fishing threshold lazily on tip selection (which might lead to delayed orphanage detection), we keep all blocks in a timed executor, and all blocks that are not accepted within the Fishing threshold and have the counter=0 are orphaned, including its future cone.
The time executor is queued on block’s solidification; so its fishing condition (and orphanage) is evaluated proactively and during tip selection.

Epoch is confirmed when there exists a single block containing a commitment to this epoch that has been confirmed.

Do we filter out epochs incorrect (although semantically valid) ECs when selecting tips? If not, then any epoch can easily be committed.

We select only blocks with the commitment we like, so the totally incorrect commitments should be orphaned, And the selected fragment is about epoch confirmation (previously finalization) not sure how this is connected to the question