Buffer Management for the ICCA Scheduler

TL;DR: The IOTA Congestion Control Algorithm (ICCA) provides fairness, short message delays and high utilization. Attackers, while issuing message above their allowed rate, may slow down the propagation time of messages from honest users and increase the number of solidification requests. In this document, we propose a drop-head policy for the queues of ICCA where old messages are booked, but not gossiped or added to the tip set. We claim that this solution avoids the shortcomings of the blacklisting approach.
PS: If you are already familiar with the ICCA protocol, read directly section “Drop-head queues”.

In the IOTA protocol (in this post, with IOTA protocol we refer to IOTA 2.0), messages are exchanged through a gossip protocol, where nodes are connected to each other in a peer-to-peer fashion. Received messages must undergo semantic and syntactic validation, timestamp and signature checks, and the adaptive PoW filter (which may be omitted in the future). Solid messages (which have correctly passed the above checks) go to the booker and, at the same time, are added to the outbox buffer. Discussions concerning the solidifier and the booker are beyond the scope of this post.

The IOTA Congestion Control Algorithm (ICCA) is a set of rules used to enforce short delays, high utilization of the network and fair rate with respect to access Mana. In particular, ICCA is formed by three main components:

Once the message is scheduled, it is then added to the tip set and gossiped to the neighbors. Currently, the tip selection algorithm is the Restricted Uniform Random Tip Selection. More information about ICCA can be found in [Cullen, 2020].

How ICCA deals with attackers

As proved in [Cullen, 2020], attackers are not able to increase their throuhgput by issuing more messages than the rate setter allows. In fact, when an attacker tries to bypass the rate setter, the exceeding messages will remain backlogged onto the outbox buffers of honest nodes which have not accumulated enough deficit for that specific queue. 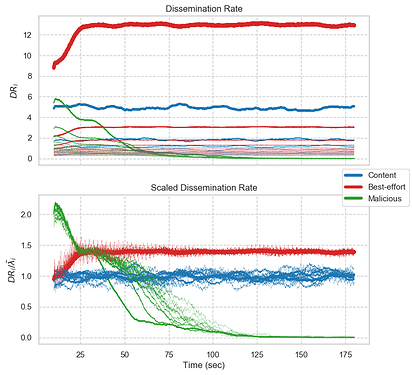 In [Zhao, 2021], we proposed a way to limit the effectiveness of the above attack. The idea is to label as “malicious” nodes whose queue lengths are above a certain threshold. To be fair, this threshold is weighted according to the access Mana of the node. When nodes get the label “malicious”, they are considered as blacklisted. If a node is blacklisted, its messages will be dropped on arrival for a given amount of time. Please note that blacklisting is local, which means that the attacker may be blacklisted by only a subset of nodes. In general, this is not a problem as attacker’s neighbors will react fast and blacklist in short time, de facto eclipsing the malicious node. There are two main problems with this approach:

We first set queue sizes proportionally to the access Mana held by the corresponding nodes. Then, when a queue gets full, we use a drop-head policy to discard the first message in the queue (which corresponds to the oldest one).

Remember that messages are boooked before being added to the outbox buffer, and scheduled messages are only gossiped to neighbors and added to the tip set. We claim that the drop-head policy successfully deals with the two scenarios previously considered:

Due to the asynchronous nature of DLTs, some messages may still be scheduled by some nodes and not by others. In case of old messages, it is not an issue as these old messages will simply be dropped on arrival by neighbors since they are duplicates. In case of attacker’s messages, the situation is more complicated. In fact, dropping messages in some nodes may lead to inconsistencies. To limit the probability this event would occur, we propose to modify the tip selection algorithm as follows.

The probability to select a message as a tip is:

The first condition allows not to select messages from an attacker inflating its queue; hence, the inconsistencies in the perception of the ledger across different nodes, although existing, should not be relevant as attacker’s messages will not be confirmed. The second condition allows that a burst of messages from an honest node is not perceived as attacker’s messages: in fact, the idea is to wait some (small) time to see if additional messages from that node are arriving, or if the burst was provoked by randomness.

Our new proposal allows to deal smoothly with resynchronization and to avoid false positive blacklisting. Furthermore, it is possible to tie the queue length per node to the current traffic volume: in such a case, the queue length would provide “for free” an estimation of the minimum mana required to issue messages: less traffic, larger allowed queues, lower amount of mana required to access the network.

How can we correctly set the queue lenghts? This is the task we are currently working on. We are building a simple simulator to evaluate the statistics (e.g., average, maximum, standard deviation) of the queues in order to find a good estimation of their lengths. The implementation of such a proposal in GoShimmer is also starting soon according to the insights taken from the simulations.

Holy snippet, any news or progress / research regarding this scheduler principle since the post 9 months ago ? Great work

Yes, the Team publishes regular updates here: GitHub - iotaledger/research-updates: Periodical updates from the research teams
And is also very active in the #tanglemath category in our Discord